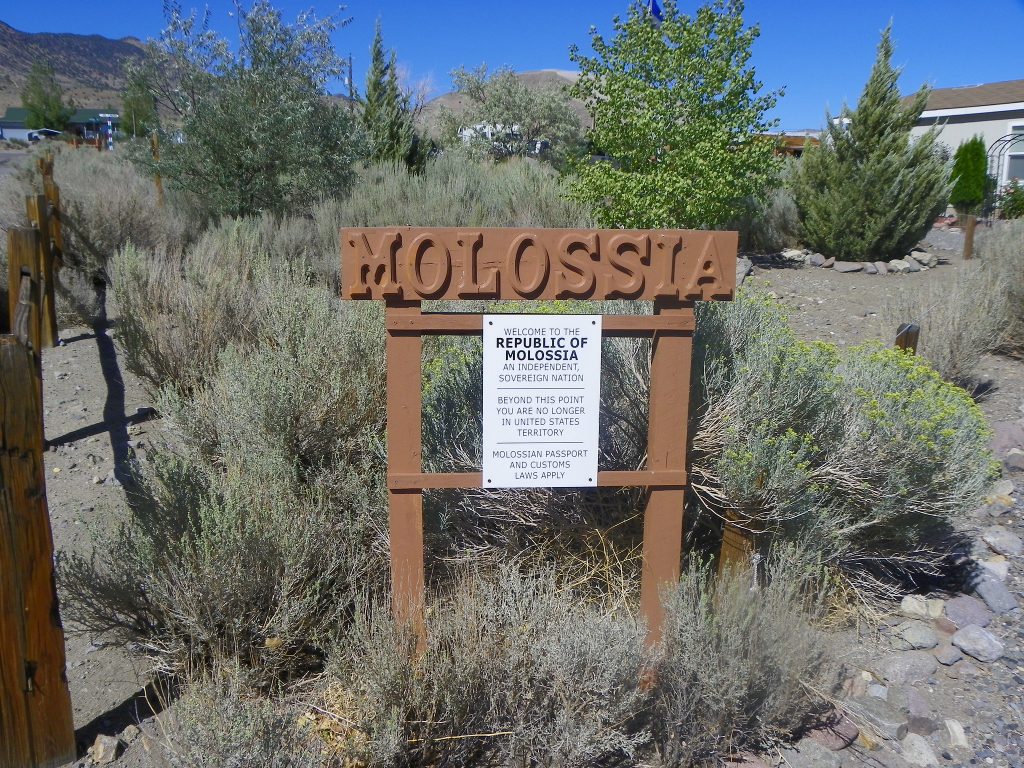 When travelers think of small countries, the first few places that usually come to mind are Singapore, Hong Kong, Luxembourg and Maldives. Also, when tourists think of popular attractions, they usually think of Disneyland, the Eiffel Tower, Macchu Pichu, Niagara Falls and Stonehenge.

If you are looking for a tourist attraction or a travel destination that’s a bit off the beaten path, check out the Republic of Molossia, a micronation and self-proclaimed independent country in the Nevada desert.

Is Molossia Actually a Country?

Let’s first define what a country is before we get to classifying the “Republic” of Molossia.

A country is a land controlled by a single government. It may be part of a bigger state or an independent sovereign state.

What makes a country a country? According to Article 1 of the Montevideo Convention, a state must meet the following qualifications:

Another criterion to consider is the Constitutive Theory of Statehood. It defines a country or state as a person of international law if (and only if) other states recognize it as sovereign. This means that you ARE a country if enough other nations recognize you as a country. This is despite the fact that you don’t have a permanent population or control over your territory.

Take Taiwan as an example. This Asian nation claims to be a sovereign state, but Mainland China asserts that Taiwan is a “renegade province” and simply another part of China. The United States, given how it doesn’t want to upset China, does not recognize Taiwan as a country.

Now, let’s take a look at the “Republic” of Molossia. Is this a country? According to the Official Website of the Republic of Molossia, the answer is yes. It exists as a state within a state, has its own land, customs and laws and exercises territory over its sovereignty.

The next question is: will you consider Molossia, Nevada as a sovereign state? The answer is up to you. What you can look forward to, though, is a quirky travel destination that you may enjoy when you make a road trip to the Silver State.

Do You Need a Passport to Enter Molossia?

The entry and customs regulations in Molossia are generally the same as those applying for the United States.

You don’t need a passport to enter the Republic of Molossia. You can, however, have your passport stamped upon entry as a souvenir.

This doesn’t mean, though, that you can simply waltz in and check out the micronation as you please. You need to obtain permission to visit Molossia. Take note that the tourist season in this travel destination is from April 15 to October 15.

Once you’re in the Republic of Molossia as a tourist, you can only stay there for a maximum of three hours.

Note: a Media Visa is required for members of the media (this includes social media) who want to visit and film in Molossia. It costs a hundred dollars per person, which you can purchase on the official website.

What to Do in Molossia

Given that Molossia is a micronation, you can easily check out the many tourist attractions of this travel destination in three hours or less.

Here are some of the places you can visit during your short stay:

The Republic of Molossia named this lovely park after a certain “Emperor Norton I” in honor of his impact on the course of Molossian history. Quirky history aside, Norton Park is a tranquil garden where you can just relax and enjoy life.

This tourist attraction serves as the public face of the micronation. It features many of the establishments that make Molossia interesting and keep the country running.

Yes, this tourist attraction does have a “banking system.” The basic unit of the Republic of Molossia is the Valora. The micronation links the value of their currency to Pillsbury Chocolate Chip Cookie Dough.

While you’re in the bank, you can buy Valora coins and banknotes, which you can get as a souvenir or for purchasing at Molossia’s business establishments.

Tower of the Winds

Molossia dedicates this structure to the desert and the wind. The Tower of the Winds also serves as a symbol of the nation.

When you’re hungry, head over to the Tiki Hut and Bar Grill for some great food. The menu consists of a wide range of unique burgers, including a Dreamy Burger, a Sexy Burger, a Saucy Burger, a Basic Bleu Burger and a Tiki Burger.

Don’t forget to try The Molossolini, a signature drink made with Sprite, cherries, pineapple, oranges, slices of fresh banana, grenadine and pineapple juice.

If you still have room for dessert, try a slice of Molossia’s lava cake. It’s a chocolate cake with marshmallows, chocolate chips and a delicious but secret lava sauce.

If you’re interested in transcending into a world of weird, head over to Molossia in Nevada. This travel destination is ideal for people who want a break from the glitz, glamour and gambling that Las Vegas has to offer.