Digital Nomad: Why Thailand Tops the Destination List Now More Than Ever?

You’d be surprised at the numbers. Indeed, digital nomads are growing by leaps and bounds. Stats taken from a study by Citrix predict that 50% of the workforce is bound to be office-free by 2020. Now, the study was done not foreseeing the COVID-19 virus pummeling the planet. So it’s highly likely there are more people enjoying the lifestyle than predicted.

And who doesn’t want to, right? When you can do work just about anywhere, it’s a no-brainer. Add the gig economy to the mix, and you know this trend isn’t going to be snuffed out of existence anytime soon. What remains to be seen now is where it will lead you.

Now, there surely are a thousand and one places to visit on your laundry list. But if you want to see another world on the planet, you may have to look no further than Thailand. The Land of Smiles is bound to enchant you. Not only is it home to the legendary Muay Thai style of fighting, but also it’s a Buddhist nation, the largest on the planet. What’s more, there may be no better time to visit than now. Here’s why.

Wait, what? That might be your reaction knowing every country on the planet has places to see. But Thailand is not just another country in Asia. It’s the only country that has never been ruled by a foreign nation. And that means it has preserved its culture.

Officially, the country is called the Kingdom of Thailand, formerly known as Siam. For one, that should reveal to you where Siamese cats originated. Know, however, that for the wanderlust in you, Thailand doesn’t run short of interesting places to see and wild adventures to experience.

Its Buddhist culture assures you the locals are as friendly as you want them. Also, that means you see profound Buddhist influence all over the nation, apparent in the country’s seemingly endless string of jaw-dropping temples and palaces. Top of the list is Wat Pho and the 46-meter long reclining Buddha. Then there’s ancient Chang Mai, a centuries-old city hidden in the thick tropical rainforest.

Thus, if you’re lusting for picture-perfect islands with golden beaches, the Kingdom of Thailand is a go-to destination you don’t want to miss. It has tons of places to see.

Easy on the Budget

As a digital nomad, the cost is a primary concern. And that’s where you will find the Land of Smiles spot on. The cost of living is relatively low. You’d definitely be spending a lot less than when you decide to base your digital nomad operation in Western countries like those in Europe.

If you want to live on a strict budget, for instance, affordable hostels are everywhere. These places should allow you to enjoy a level of comfort without having to spend extra on the dollar. To make it even more exciting, hostels give you the chance of meeting other digital nomads from other countries.

Of course, there are more pricey options if you want to splurge. While you may choose to stay in a cheap room, there’s also a $1000 resort to dive in. Note, 1$ equals 30 Thai Bahts (THB).

Still, you’re bound to be surprised looking at how cheap living in Thailand can be. For instance, authentic Thai cuisine, arguably the most mouth-watering in Asia, can be had at less than 5$ in one pop, noodle dishes including. You can even rent a scooter motorbike for less than $10 for the whole day. 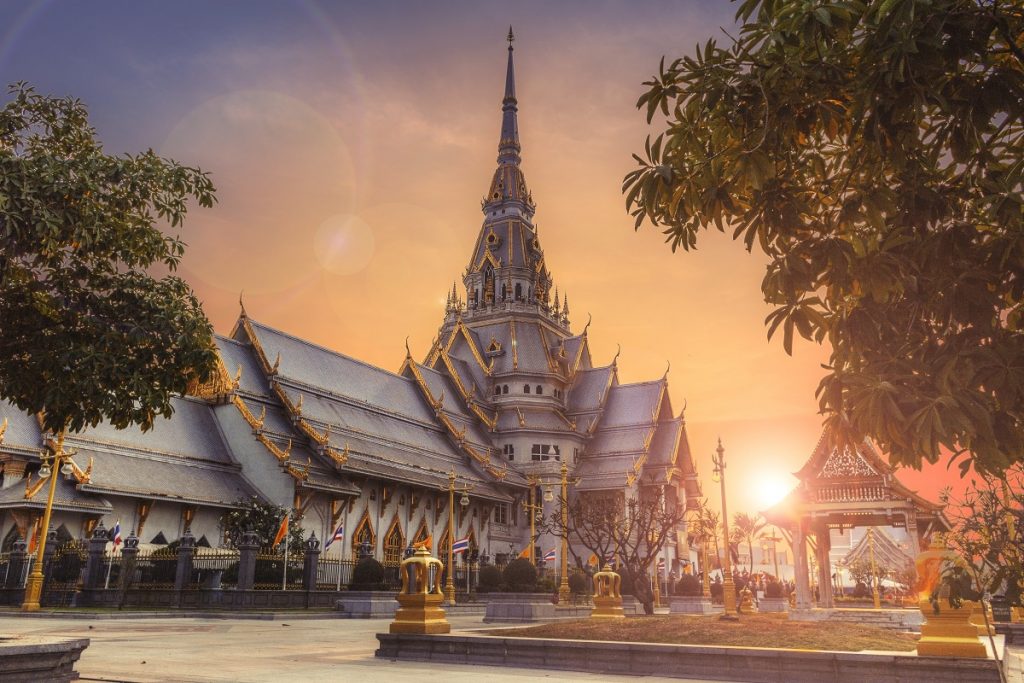 Now, you might want to know about the internet connection. It’s the elephant in the room. Of course, if you plan to hike in a jungle or to a mountain top, the internet would definitely be an uphill climb. But the good news is Thailand’s internet backbone is pretty sturdy. So finding satisfaction in a 10MBps internet connection in the major cities should not be a problem.

Even better, you’ll find a slew of coworking spaces you can do business with all over these cities. And thrive in the process. That is telling you Thailand is definitely ready for you.

And if you want to take the business further, places like the Work Loft (Bangkok) will give you a full-service office at a reasonable cost. So you can enjoy stable internet and the privacy of a room for executive meetings. As for English, a quarter of its over 60 million-people population can speak the language, albeit for many not fluently.

To top all that, Thailand is now open for international travel. That should be a cause of joy for you.

Since November 2020, the kingdom has opened itself to the world. Right off the bat, know that this Buddhist nation’s total number of COVID-19 cases is less than 30,000. Indeed, that’s way less than the over 3 million cases in America.

Then again, there’s an admission process. People from all over the world need a special tourist visa to visit. But here’s where it gets interesting for you. Citizens from the US, Canada, and Australia may come in without a visa. Just a 2-week quarantine and some tests will do.

That’s telling you if you want to pick your digital nomad lifestyle right up, then focusing your sights on the Kingdom of Thailand is wise. It’s thinking clearly.

PrevPreviousHitting the Road? Make Sure You Have Roadside Assistance
NextWake Up Refreshed On-board: Prep for Your Red Eye FlightNext
Scroll to Top
Go to mobile version