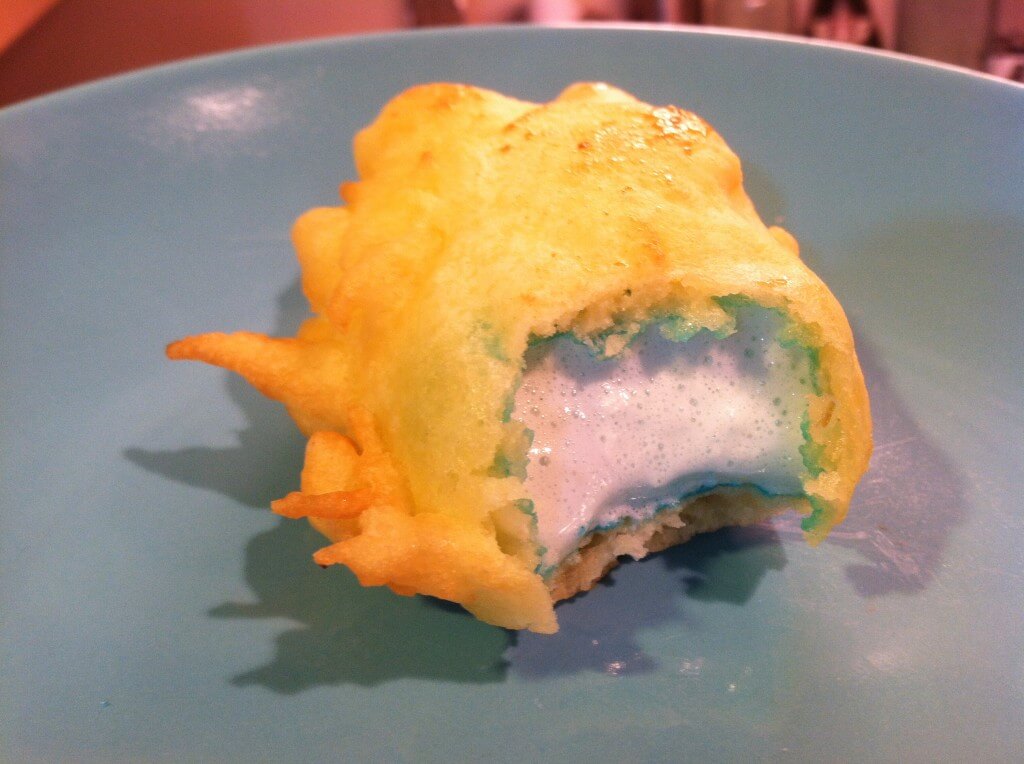 I’m still on my Easter themed Peep kick.  Rather, I still have leftover Peeps that can – in one way or another – be sacrificed to the food gods.  I last sacrificed three dozen Peeps to make some Rice Krispy treats with a technicolor twist.  I had given some serious consideration to sharing that with my co-workers.  After a taste test I thought better of it and consumed the whole thing by myself, over the course of a week.

I had read up on several attempts to deep fry Peeps.  Often as not the Peep would nearly disintegrate or the coating would come slipping off, leaving virgin marshmallow to be decimated by hot oil.  I jumped into this knowing only what had been tried before and didn’t work.  There’s not a lot of documented deep-frying of Peeps going on, clearly.

I had one dozen Peeps left and decided to document, Peep by Peep, the evolution of the process until I’d arrived at the perfect deep-fried product.

There’s a relative dearth of information regarding what a good batter might be for such an endeavor.  I went off-road a bit and adapted a frying batter to make things a little thicker.  Thin didn’t seem like it would work our terribly well for a marshmallow creature in hot oil. 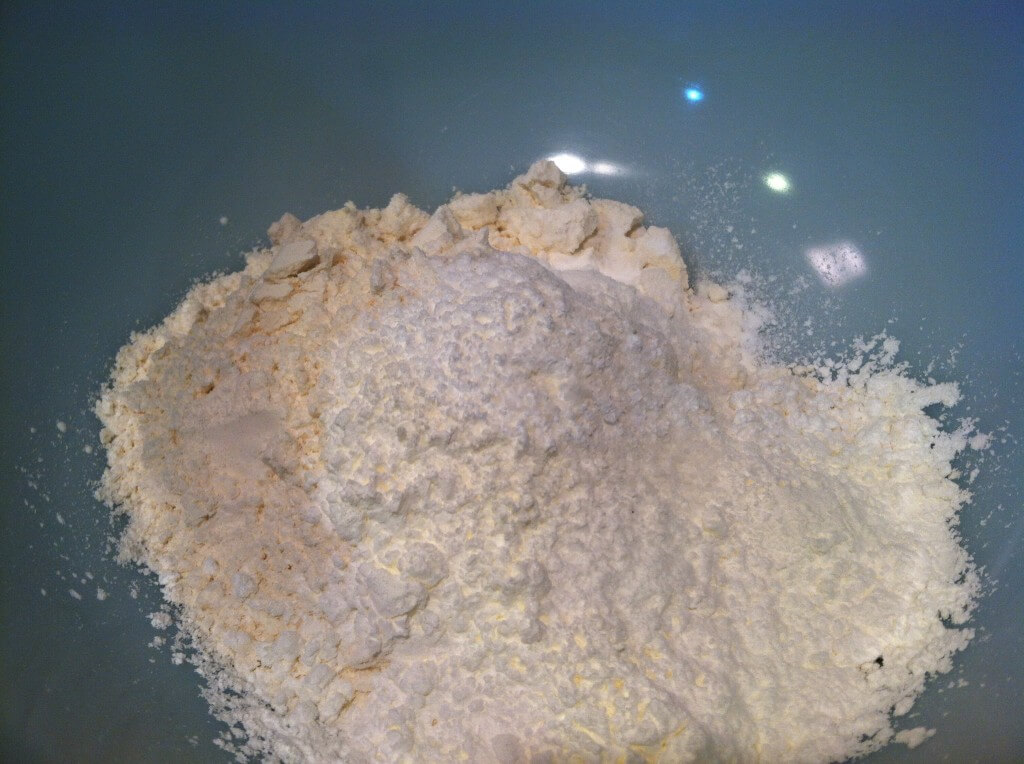 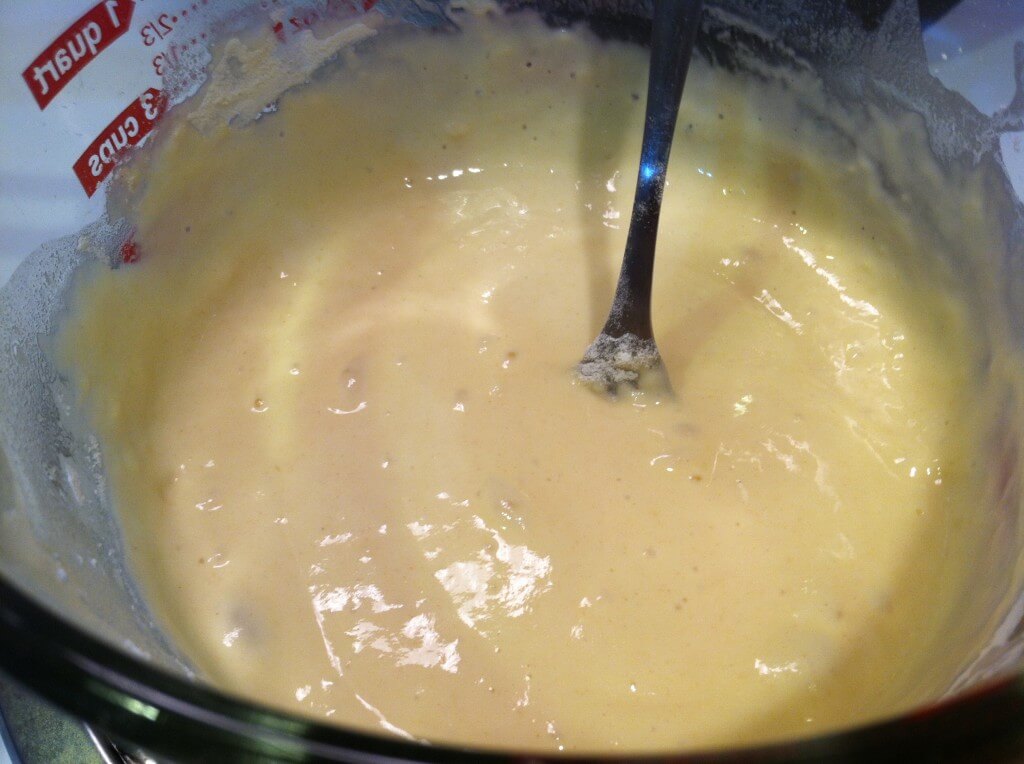 I mixed 1/2 cup AP flour, 1/4 cup cornstarch, 1 teaspoon baking powder, and 1/4 teaspoon salt into a large bowl. Mix until combined. In another bowl, whisk together 1/2 cup milk, 1 egg, and 1 tablespoon of vegetable oil. Combine the wet and dry mixtures and whisk together. You should be left with a fairly thick batter. You can adjust consistency either way by adding milk or flour, accordingly.

I used a little small pot and filled it with about an inch to an inch of light oil. You don’t need a whopping vat of grease to get these done. They’re light so they fairly float atop the oil. If I’m honest I used less than an inch and that wasn’t an issue. Given a few minutes puttering away on the stove top, my infrared thermometer was reading 350 degrees F, perfect Peep frying temperature.

My first Peep I just submerged into the batter, gave a good coat, and set upon the oil. I had thought the batter a bit thick to begin with. I made some quick adjustments, adding a bit more milk. Results for the first Peep proved that I was sadly mistaken, in my estimation. The coating was thin and the Peep itself saw hot oil in several spots. I was left with a cicada like shell of batter and not much of anything inside, bar a bit of sticky blue sugar. Some nice fried taste and crunch but little else. This also necessitated cleaning up the oil a bit, fishing out the stray bits of hot marshmallow that had ebbed out. 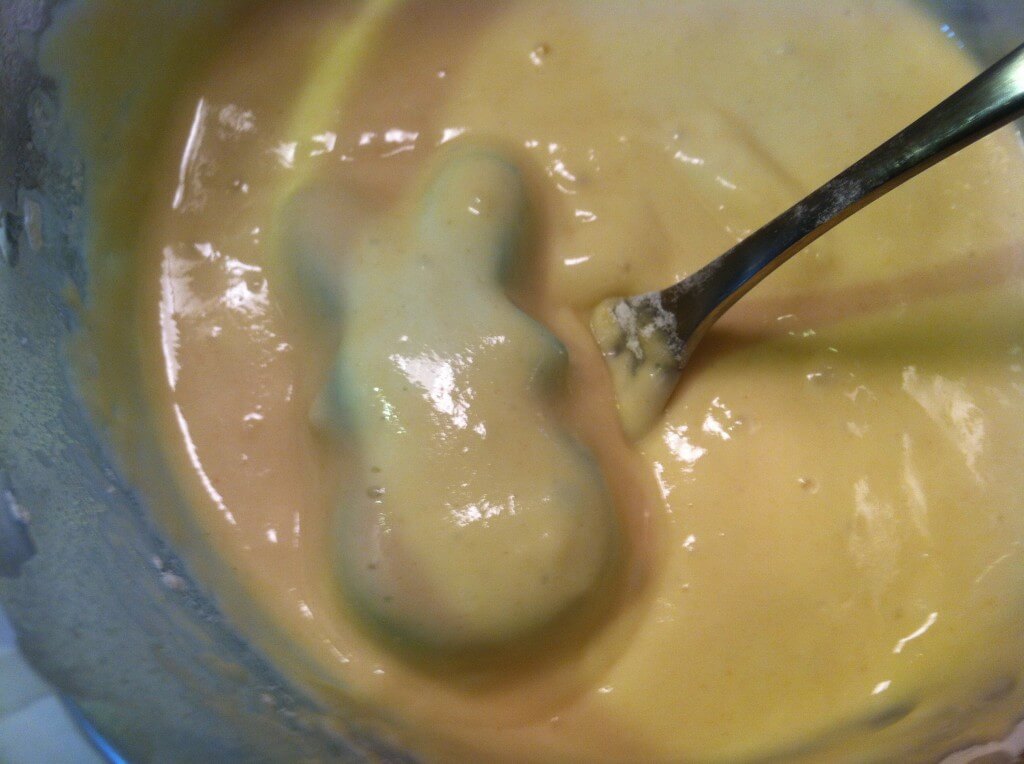 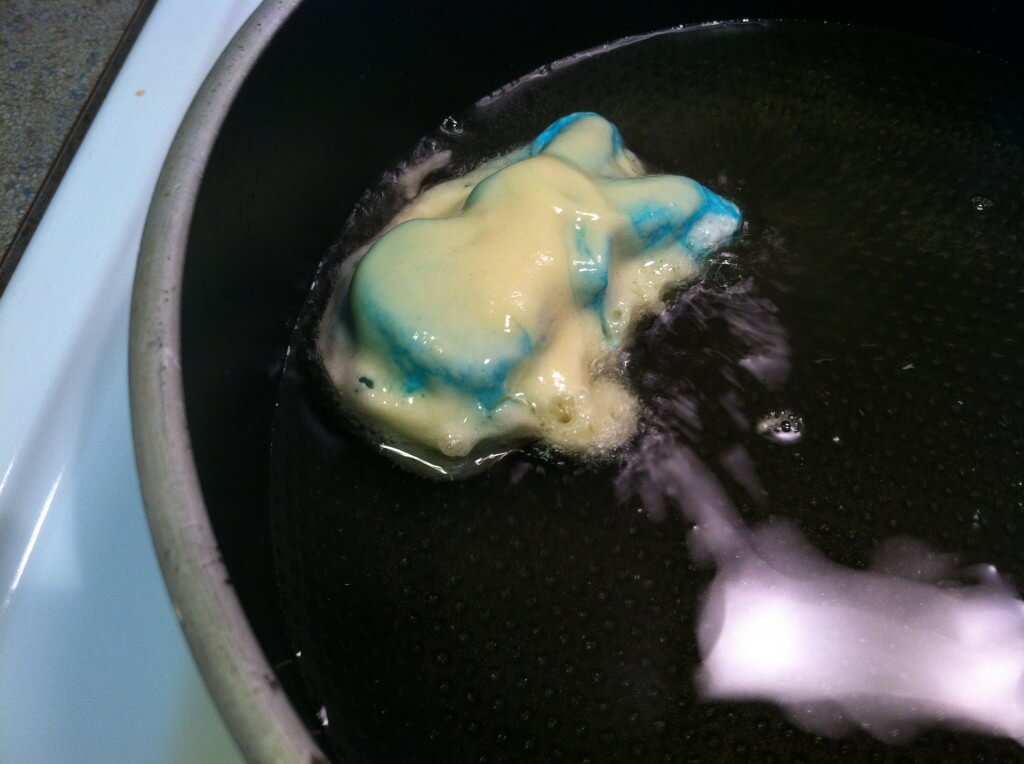 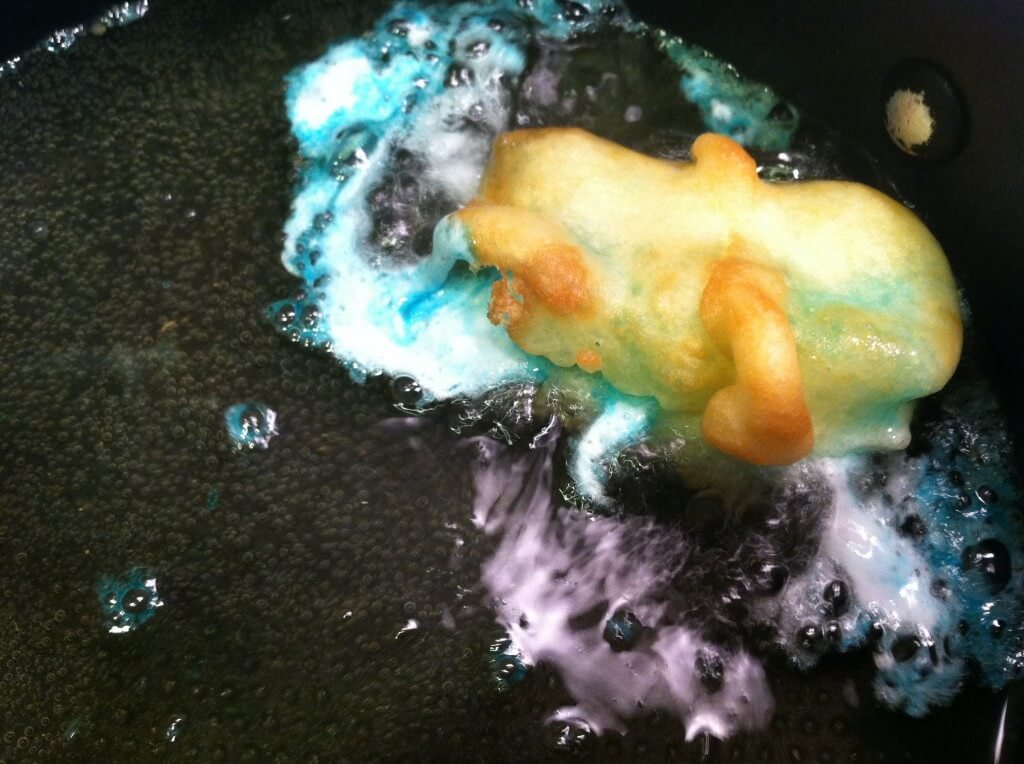 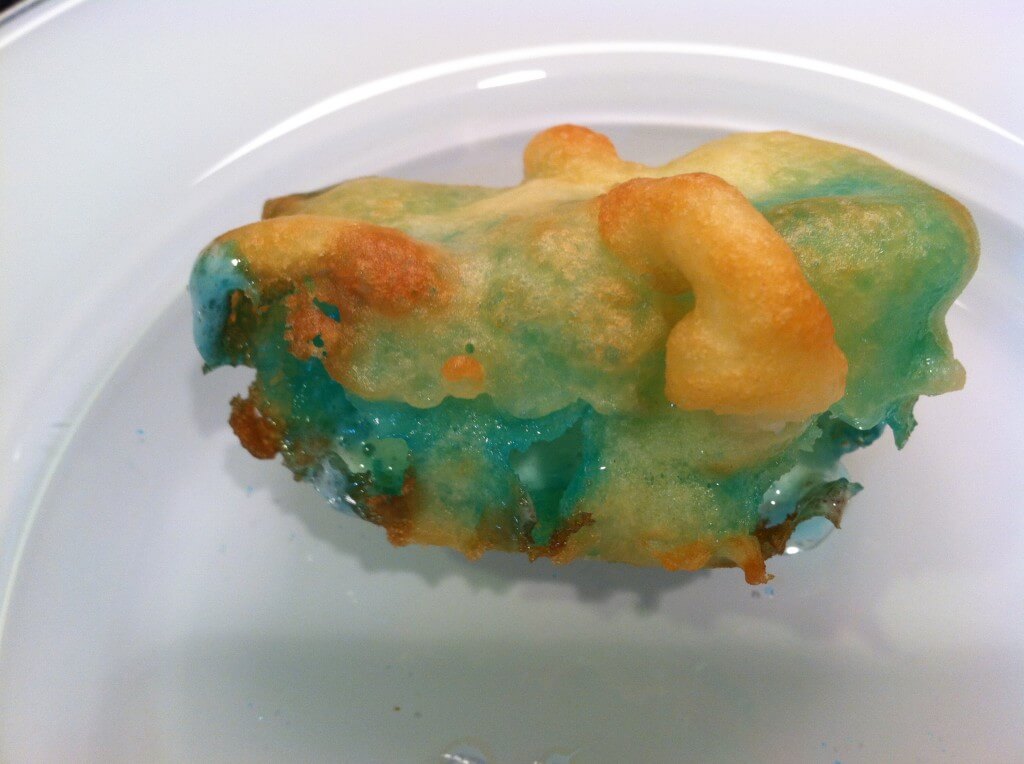 Fail. So I readjusted the batter, adding a bit of flour back to the mix to thicken it up. Figuring that I needed a little extra window of protection from the hot oil, I soaked the second Peep under running water for a second. No really. Get it good and wet. Then I rolled it in flour. Give it a good coating. You want it to look like it just came in from the snow. Too much is better than not enough for this application. In spots mine was caked on. 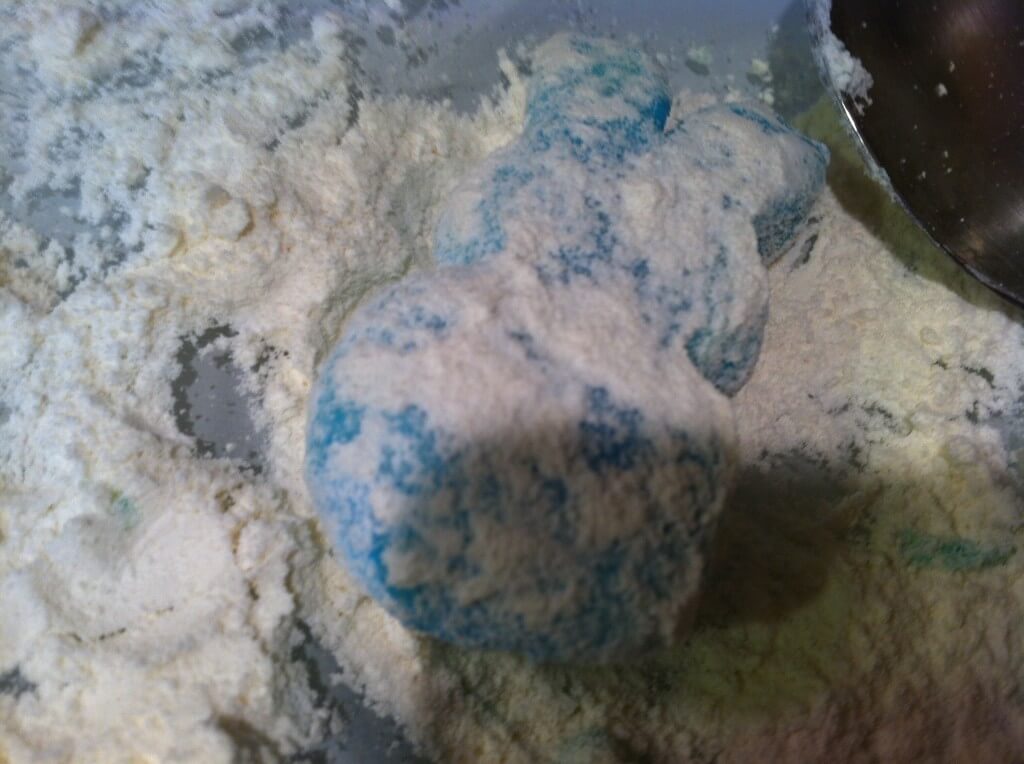 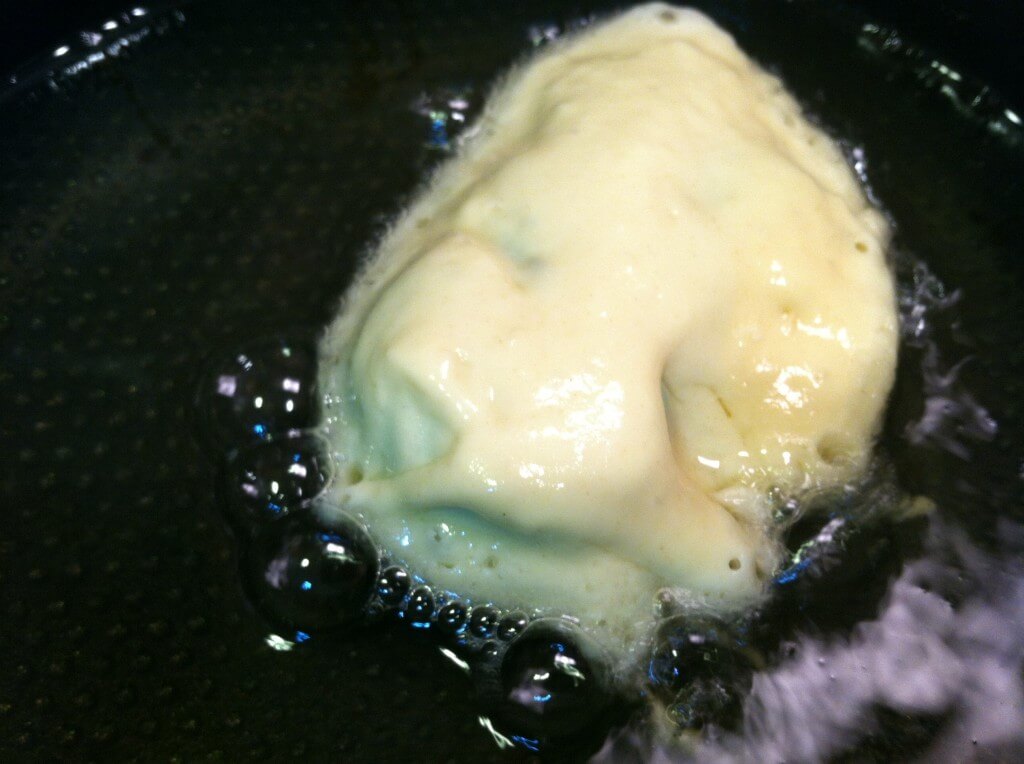 Now port that sucker right over to the batter. The thicker batter was having a little reluctance to sticking 100%. I had to jump in with my fingers just to make sure it stuck all the way around. 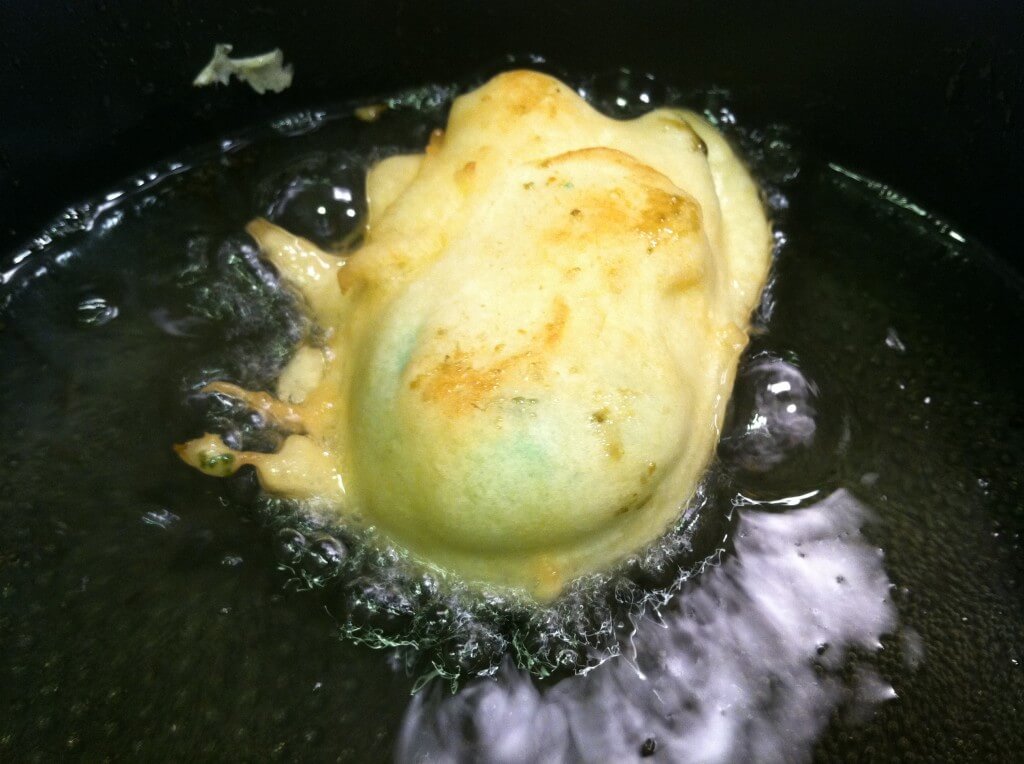 I stuck the oil back onto the heat, got things up to around 350 degrees F, and plopped my second Peep in. It didn’t take long to see that this one was coming along quite differently. The batter was puffing up slightly. The coating was sticking. And there still appeared to be something actually in the middle. It took maybe 30 seconds per side, give or take. It looks for all the world like some fried delight you might expect from the carnival when it’s in town. Indeed, the premise is much the same. 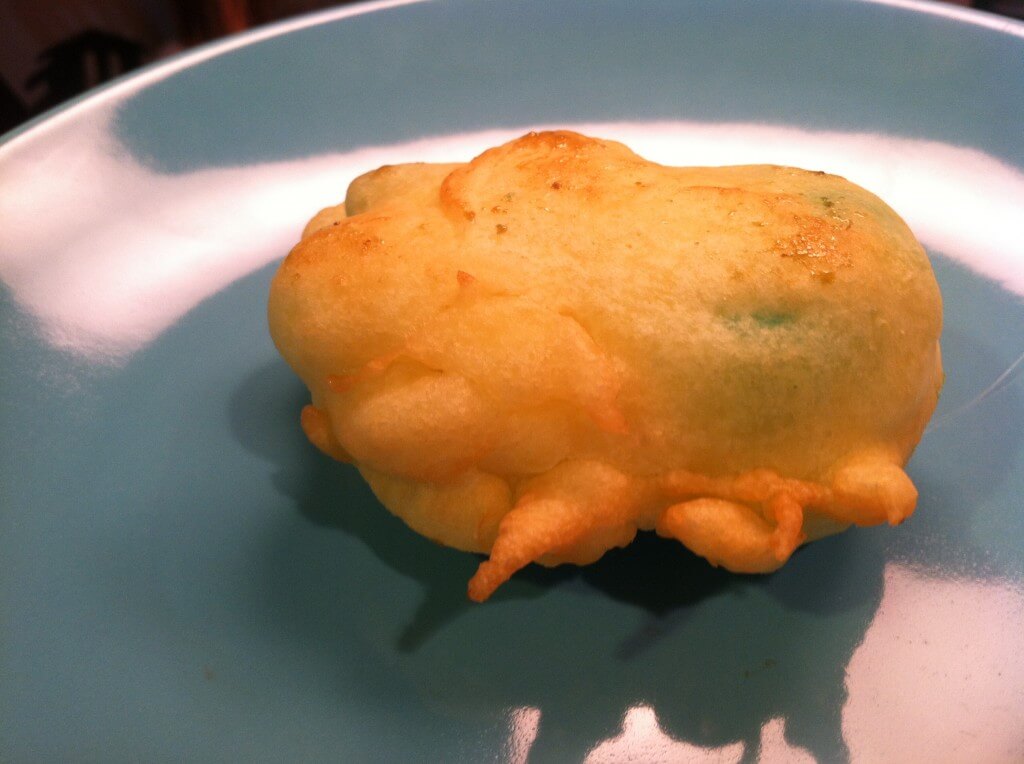 This was an instance of not needing to go any further because I’d hit upon what I think is gold. The Peep had turned back to a soft, s’more like marshmallow, completely filling the fried battered outside with soft, warm, gooey, and in this case – blue – marshmallow Peep-ness.

In the interest of science and making sure that this wasn’t a one-time, synergy of melted/fried Peep perfection, I made several more to ensure the repeatability of the recipe.  The things we do to maintain our integrity.

Overall, huge success.  The amount of batter in the recipe will coat quite a few Peeps.  More than six I should think.  So for somewhere on the order of six to eight servings (I can’t condone a serving being anymore than one of these – and quite infrequently at that) you’ll need the following: